The "SSH Log" recording feature lets you record ssh sessions of system administrator, system engineers , developers ,network administrators  accessing remote  Linux servers /  cloud instances / switches / routers and other network devices via ssh.  In other words, you can log all things that happened via an ssh session on a linux device, router device or a switch device and log them all into a log file which can later be reviewed, revisited or can be pipelined to log processing engines. 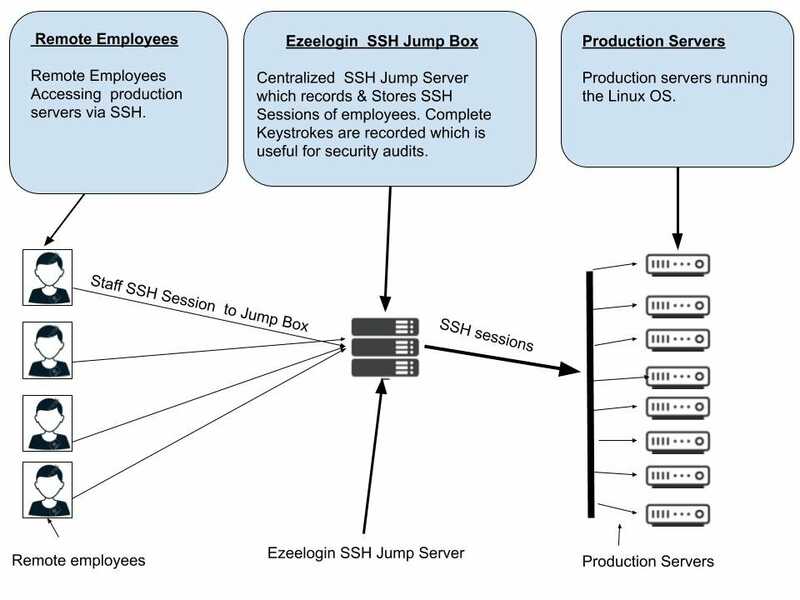 There is  NO need to install a agent on the  Remote Linux servers ( Production servers ) to record ssh session of users accessing the servers via ssh.

The ssh session recorded lets you audit the ssh users accessing the Linux servers remotely via the ssh protocol. You can also monitor an ssh user in real-time.  You can also search the entire logs recorded for a string or pattern which is very useful to perform security audits on various security incidents, lapses, security forensics etc. This is useful for meeting security compliances like pci dss, hippa, nist , nerc, ffiec etc.

1. To enable ssh recording of the jump server users on the Ezeelogin ssh jump server GUI, do the following.
Navigate to Settings->General->Security->SSH Session Logging

There are 3 settings to record the ssh sessions

2. How to view the user ssh sessions recorded on the Ezeelogin ssh jump server GUI?

A)  Navigate to users->SSH log and select the jump server user and the server to view the recorded session for that server.

3. How to view the ssh sessions recorded of a user in real-time?
a) Identify the ongoing ssh sessions which have the status ' Active' and Click on its  'note' icon on the right.

b)Click on enable streaming and choose the interval of 1 second and you will be able to what the jump server user is doing on a server in real-time.

Ensure to disable ssh log encryption under Settings->General->Security->Encrypt SSH Session logs so that the Enable streaming button is visible.

The ssh logs recorded for every gateway user is stored in the filesystem directory /var/log/ezlogin/input/{username}.  The input directory stores only the inputs from STDIN devices such as keyboard, mouse etc hence the input log would contain every keypress of the user including password and invisible characters. The directory /var/log/ezlogin/full/{username} stores the output from STDOUT devices such as monitor, printer etc, hence the output logs would contain every character that is printed on the screen. It is recommended to enable STDOUT recording under Settings->General->Security->SSH Session Logging->Output. Also, refer the article strange characters in INPUT logs recorded. Only the metadata is stored in the Ezeelogin mysql database, ie the path to the files storing the ssh logs and the dates.

You can enable ’Encrypt ssh session logs’ under Settings->General->Security so that logs are not human readable. Note that the logs are only readable from the GUI. In the backend, the ssh logs are stored in the /var/log/ezlogin directory.

5. How to search the users recorded ssh session logs for specific strings or keywords?

Enter the string to be searched in the field 'Log Content'.  The results show the matching logs and user, username with which the server was accessed and the login and logout times are recorded as well. 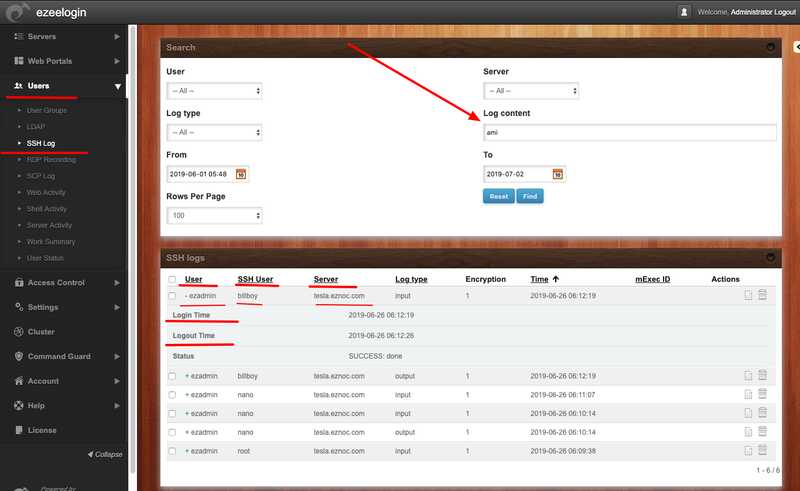 6. The  Administrator user can download any users ssh session to remote devices as a text file by clicking on the blue arrow as shown below.

8. How to get local, timestamped logging of all ssh commands?

At the moment only the ssh session start time and end time are recorded and not the times when each command is run.  In order to have the timestamps of commands executed in ssh, the easiest method would be add the date in the command prompt in the bash shell as follows.

For Centos, edit bashrc file and add the line at end of the file or  refer article to modify command prompt in CentOS

An example of adding timestamp on a Centos server.

The recorded output session in Ezeelogin will contain the date and timestamp as shown below.

Do refer the article to add the time in command prompt for OS such Ubuntu, Debian and others.

Recording of software tools using ncurses libraries or text based graphical libraries such as htop, top, midnight commander is not supported.

4 people found this article helpful what about you?